Christine Bridgwater has worked with dogs and horses for over thirty years.  Progressing through the British Horse Society exam system she trained as an Instructress and worked in top yards in the UK and abroad.  A car accident put a stop to the competitive riding in 1978 which is when she acquired her first English Springer. Thereafter followed a career change into accounts and administration for a courier company; this took her around many parts of the world.

In 1991 Christine returned to the country - but now with about ten home bred English Springers... She moved to the Cotswolds to turn out seven hunters for a lovely family in VWH country for two seasons. Whilst working there, and also living at Gatcombe Park, she developed skills in hatching and rearing pheasants under Gatcombe's superb Head 'Keeper - Graham Cummins. This led to having her own duties for several years on a modest shoot next door. During the seven years at Gatcombe she shared the pleasure of whelping various bitches for HRH The Princess Royal who maintained daily contact with her dogs.

Graham Cummins set up the Save The Children series of Retriever Tests back in the late 1980s which Christine took over to co-ordinate single handedly until 1997. She would set all the Tests for the Finals at Gatcombe Park and for one year at Badminton. Everything from trophies to toilets had to be arranged and were kindly paid for by the wonderful Sponsors - Barbour. This much loved Event carries on to this day through the hard work of other folks. 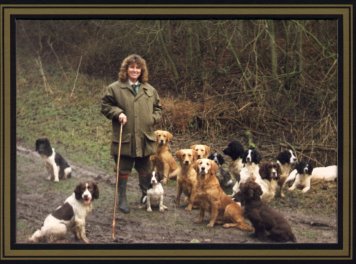 Christine's own dogs, particularly her favourite English Springers are renowned for their working ability both at home and abroad.  Christine registered her affix, Scherzando, with The Kennel Club of Great Britain in 1983. Competitively she has successfully trialled English Springers, a Clumber and a Golden Retriever. Regularly mentioned in various journals from The Shooting Gazette to the Countryman's Weekly.

The last dog Christine campaigned hard in Open Stakes was Santa of Scherzando back in 1993. This bitch ran off for first several times but more or less refused point blank to run close to another dog so we have a drawer full of 2nds. As a puppy this same bitch would put four holes into any dummy - simply to express contempt - yet she never damaged a bird. Quite a character, her breeding went back to Emma Lene.

Christine has trialled a couple of times since, with an oldish Open dog gaining a few minor awards. Also a couple of homebred youngsters..

Christine is not particularly competitive and since the season of 1997/8, when she left the Cotswolds, she enjoys and has concentrated more on training youngsters from puppy to the finished article and then placing them in permanent shooting homes which must be suited to the dog's temperament. No point putting a hard going dog with a soft handler or vice versa.

Christine prefers to train her own "home grown" pups which are, therefore, thoroughly familiar tried-and-tested material. She also admits to being too sentimental about parting with her oldies; hence she keeps too many. Christine breeds and trains her dogs from her home in beautiful rural Hampshire.

As an affix, Scherzando is acknowledged by many as amongst the best by other top breeders and praised by knowledgeable authors such as Mike Smith and the late Bill Ironside. Her dogs can be found behind many top lines in Europe and Eire as well as at home. Christine goes to tremendous lengths to ensure her breeding programme is tip top. All her breeding stock has been eye screened and hip scored since the 1980s and all are now screened with any DNA test available for the breed and always will be. All dogs bearing the kennel name Scherzando are 101% health tested.

Christine likes her gundogs to be 100% workers first with the competitions coming quite a poor second.  She's very proud that even her 'pensioners' are finely tuned when it comes to working for a living. Christine is famous for taking out up to twenty dogs picking up - she says it isn't a trick.  Just her way of making sure all her dogs get out every shoot day!  Even if they don't get a retrieve they have had a lesson in patience.

Christine has been the Secretary of The Meon Valley Working Spaniel Club for nearly thirty years, with a few months break...  and was instrumental in making the society what it is today.  She represents them on the Kennel Club Field Trials Council and serves on several other dog committees helping with other Clubs' Trials as well as, usually, ten per season for the Meon Valley.  The Meon Valley's excellent site is

Competent and admired in the UK (Kennel Club B Panel) she has also judged in Europe for other organisations such as The Swedish Clumber Spaniel Club, FITASC's Spanish Spaniel and Pointer Trial Association and has judged Open Qualifing Spaniel Trials in Denmark. She is a Kennel Club Approved Presenter for Spaniel Field Trial Seminars and has also presented Seminars in various other European locations. She is a regular Speaker and Demonstrator at home and overseas.

Click on the picture to to to Christines Album 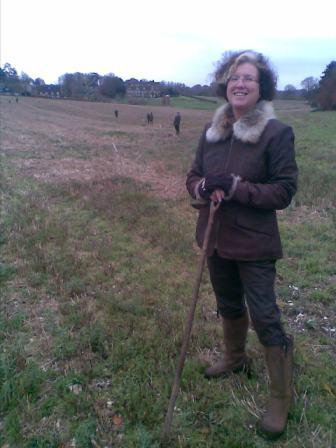 Currently Christine has English Springers, Labs and Cockers in the kennel with  an elderly Papillon and, now more than a few, Chinese Crested dogs indoors... she had always wanted one of these, acquiring the lovely Percy in 2008... then the bug bit and the numbers increased.  What a mixture!!  Nearly all the workers are homebred and, at least half of them, are youngsters in training. 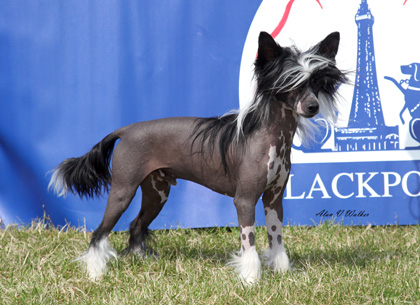 Dutchie - Chris's import Chinese Crested joined the crew 24th June 2009 and won first time out 26th June.
First shown by his breeders on 15th Feb in Holland - Best dog puppy and best puppy in breed under Mr Rony Doedijns (Holland)  -  they are a new obsession! Dutchie is NL and Bel Ch and has two CCs and one RCC in UK