More
International Game & Country Fair Demonstrations
Undertaken during the summer months, Christine can cater for everyone - all her dogs are rabies vaccinated so can travel freely all over Europe.  From small local events to something as prestigious as the CLA's Game Fair where her dogs were always a popular attraction in the main ring. This as well as organising the International Spaniel Events in previous years and commentating for other handlers such as Ian Bateson and Peter Richardson.

Usually Christine's show runs through the training of a Gundog from puppy to adulthood, both spaniels and retrievers.  Finishing by working both at the same time.  Occasionally she works her dogs alongside and for hawks depending on the birds involved in the falconry display.  Christine provides at least 12 dogs per event.

Corporate days can easily be catered for, appearances as a "picker up" at simulated clay shooting days a speciality! Timings and number of demonstration per day by arrangement.

At the last CLA Game Fair at Broadlands Christine organised The Meon Valley's demonstrations, as well as her own, in the Working Dog Arena.
Film Star Dogs

Christine's dogs have been available for film work, on location and still photography 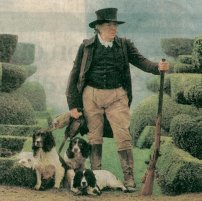